We hope to do real-time play-by-play during our 2019 trip!

Follow along through GameChanger!
Posted by SM Sister City at 12:08 PM No comments:

Final Round of Tryouts - POSTPONED

Our upcoming round of tryouts (Feb, 12th) will need to be postponed due to the extreme weather closing down the allocated fields.  We are sorry for this inconvenience. We will reach out to you again as soon as we are able to reschedule and lock down a location to continue the tryout.  Thank you for your patience.

All players should have been notified using the email that was provided during signups.  We understand a few people may not have seen this email, but we received no bounce backs, so please recheck your emails and spam folders for an email from smsistercity@gmail.com; Subject: Tryout Notification.

Posted by SM Sister City at 3:10 PM No comments: 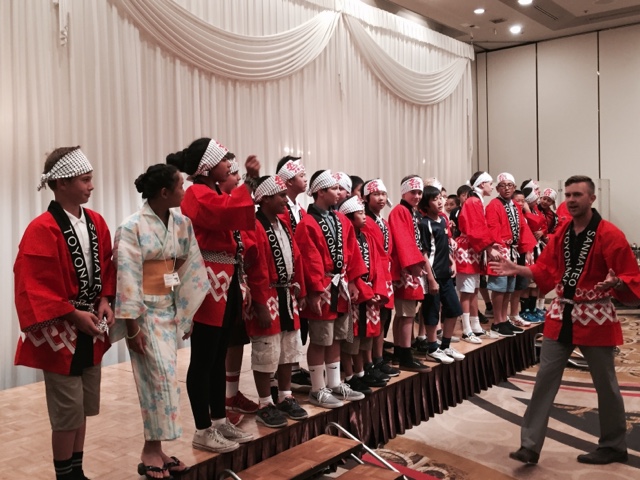 Posted by SM Sister City at 5:47 PM No comments:

San Mateo Battles Back to Tie Toyonaka to Complete Exhibition

Single runs in the third and fourth and a pair of runs in the fifth brought the San Mateo Sister City All-Star Baseball Team to a 4-4 tie against a combined Toyonaka East and West team, which is how the game would end after reaching the 90-minute time limit. The tie wraps up the five-game exhibition, giving San Mateo a 3-1-1 overall record.

Toyonaka jumped out to an early 4-0 lead after an unearned run in the first, two runs in the second and another lone run in the third.

San Mateo started to claw its' way back in the bottom half of the third. With one out, Zachary Harte got the team's first hit, a double to right center. Ryan Ivers singled in the infield to move Harte to third. With two outs, Jacob Kalaveras drilled a single to center to bring home Harte.

In the fourth, Pablo Ossio led off the frame with another double to right center. Noah Frandsen then singled for his first of two hits on the day, moving Ossio to third who then scored after a Samuel Auyeung's fielder's choice.

San Mateo would come all the way back in the bottom of the fifth. Alika Woon led off the inning with a triple to deep right field. Cynthia Leong then executed a perfect sacrifice bunt to bring in Woon. With one out, Nolan Rau started another rally with a single to center. Ryan Harvey single to center and Ossio then added another base hit to load the bases. With two outs, Frandsen came through with a single to left to drive in Rau for the game's final run.

Guidino Jr. tossed the game's first three innings. He struck out two while walking a pair. Auyeung took the hill for the final two shutout innings.

Tomorrow, San Mateo continues the trip with a sight-seeing excursion to Kyoto. 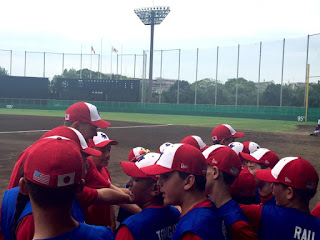 10 runs on eight hits opened the flood gates in the fourth inning as the San Mateo Sister City All-Stars took game two of the double header, avenging yesterday's loss to the Toyonaka East squad, 11-2. With the win, San Mateo moves to 3-1 in the five-game series.

San Mateo jumped out to a 1-0 lead in the first. Ryan Ivers led off the game with a single. Gabriel Gudino Jr. laid down a perfect sacrifice bunt to move Ivers to second. With two outs, Nolan Rau singled past the short stop, bringing home Ivers.

Toyonaka evened the score in the bottom half of the second with an unearned run.

And then the inning of all innings happened in the fourth. Joe Tongamoa, batting for Noah Frandsen, doubled to lead off the frame and scored one batter later on a single to right by Ryan Harvey. Jacob Kalaveras followed with his first of two triples of the game, driving in Harvey. Zachary Harte drew a walk. Ivers followed with a single, bringing in Kalaveres. The bases then loaded after Guidino Jr. was hit by a pitch and were quickly cleared with a Jake Willerup double. Rau then followed with a walk. With Alika Woon at the plate, a wild pitch brought home Willerup. Woon then double right. Pablo Ossio continued the hit parade with a single to right, plating Rau.

Nine runs had scored in the inning before an out had been recorded. With one out in the fourth, Cynthia Leong grounded out. On the play, Woon came in to score the inning's 10th and final run. Kalaveras added his second triple in the inning, however he was stranded there when the inning ended.

The score would remain 11-1 until Toyonaka East added a single run in the fifth to cut the lead to 11-2. That is where the game would end after the time limit.

Frandsen started on the mound, tossing the first three innings. He gave up an unearned run on one hit, striking out one and walking three. Ivers threw the final two frames, surrendering an unearned run on two hits. He struck out one without any walks.

The fifth and final game is schedule for tomorrow at 1 PM after a trip to city hall to meet the Mayor. The weather report shows rain throughout the day. If it does rains, we will attempt to reschedule the game for Wednesday morning. 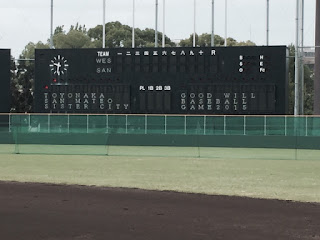 The San Mateo Sister City All-Star Baseball Team's bats clearly had been jet-lagged the past two games and picked a perfect time to break out!  San Mateo exploded for five runs in the first and another four in the second on their way to a 9-0, two-hit victory over the Toyonaka West All-Star team. With the win, San Mateo's record moves to 2-1.

Alika Woon got the bats going in the first with a leadoff triple. He would score on a one-out triple to right by Pablo Ossio. Ossio would score one batter later on a right-center triple by Jake Willerup. Willerup would not stay at thuird long as he was driven home on a single by Will Bonini. Joe Tongamoa walked and Iris Nai walked to load the bases. Noah Frandsen's opposite-field double plated Bonini and Tongamoa for San Mateo's fifth and final run of the inning.

The second inning started in a similar fashion, only this time, Woon added 10 more feet for a homerun. With one out, Ossio singled to start up a new rally. Willerup tripled again to drive home Ossio and quickly scored himself when Bonini doubled to right center. Bonini scored the game's final run on an error by the short stop. 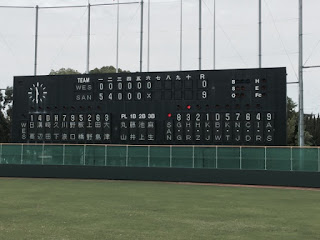 San Mateo has a re-match later today as part of a double header vs. the Toyonaka East where they look to avenge yesterday's, 9-3, loss

Posted by SM Sister City at 8:05 PM No comments: