Posted by SM Sister City at 3:47 PM No comments: 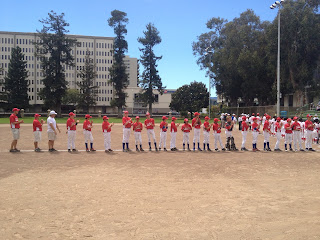 Four unearned runs in the third inning proved too much for the San Mateo Sister City All-Star Team to overcome, falling 4-3 to the Toyonaka All-Stars at Central Park. The loss drops the boys from San Mateo to 0-3 in the best-of-five series.

San Mateo went down in order for the first three frames and finally showed some life in the home-half of the fourth. With one out, Jack Hagerman broke up the Toyonaka no-hitter with a double to left-center field. With two outs in the inning, Jordan Berger singled to right to give San Mateo runners on the corners. Nicholas Elu followed with a single up the middle to plate Hagerman and cut the Toyonaka lead to 4-1.

San Mateo chipped away at the lead some more in the fifth with another solo run. Evan Donath led off the inning with a double over the right fielders head. two walks later by Sancho Llama and Jose Zalba respectively loaded the bases. Jarrett Nelson followed with a single to right to bring home Donath. Three straight outs later left the bases full and the inning over.

San Mateo again showed that never-say-die attitude in the seventh as they tried to mount a comeback. With one out, Llamas tripled to right and came home to score on a Zalba fielders choice out to the second baseman. That would be the final run for San Mateo on the day.

Haruya Tomura followed up his 132 pitch, six inning performance on Wednesday night with a 112 pitch, seven inning performance for Toyonaka to earn his second win in the series. He allowed three runs while striking out 11, walking three and giving up seven hits.

Games four and five will be played as part of a double header tomorrow at Central Park. Game four is due to start at 10 AM followed by first pitch for game five at 2 PM.

San Mateo Falls in Game 2 to Toyonaka in Extra Innings

A two-run blast by Nicholas Elu and a solo short by Jose Zalba was not enough to propel the San Mateo Sister City All-Start team (0-2) over the Toyonaka All-Stars (2-0) on Thursday night at Martens Field. Toyonaka took game two, 7-6 in eight innings to take a two nothing lead in the best-of-five series between the two cities.

Like last night, San Mateo, (the visiting team) jumped out to an early lead with two runs in the top of the second. With one out, Pitcher Peter Martin doubled to center and advanced to third on a single one batter later by Jordan Berger (one of two hits on the night). Martin then came in to score on a single by Jarrett Nelson. With two outs in the inning, Berger scored from second on an Adam Bever double to center.

San Mateo added to their lead in the third frame. Sancho Llamas singled to lead off the inning. With two outs, Elu crushed a 1-2 fastball to deep left field to give San Mateo a 4-0 lead.

The lead would be cut in half in the bottom half of the inning as Toyonaka managed four singles and would knot up the score at 4-4 in the home half of the fourth.

With two outs in the fifth, Zalba sent a 1-0 pitch high and deep over the left-field fence to give San Mateo the lead once again, 5-4.

The San Mateo lead would not last long as Toyonaka took their first lead of the night, 6-5 in their half of the fifth.

Neither team scored in the sixth.

In the seventh, San Mateo showed extreme heart and a never-say-die attitude. Down one in their last at bat, Keala Sexton doubled to right-center to open the frame and advanced to third on a perfect sacrifice bunt by Tristan Dewing, who also reached base on the play. Luke Bottari followed with a line-drive single up the middle to plate Sexton and tie the game at 6-6. San Mateo would strand runners at second and third to end their scoring threat.

Toyonaka went down in order in the bottom of the seventh and San Mateo went quietly in the top of the eighth.

With a tie game on the line, Toyonaka broke the tie with a couple of San Mateo miscues and a single to right.

Peter Martin started on the hill for San Mateo, going the 3.1 innings while allowing four runs on five hits, walking four and striking out two. Sam Marks followed out of the pen with 2.2 solid innings, giving up two runs on four hits while walking and striking out a pair of Toyonaka batters. Jack Hagerman was the unfortunate recipient of some costly errors in the eighth. He closed out the last 1.1 innings, allowing an unearned run on two hits while striking out one.

Otaku Seiya went the first five innings for the All-Stars from Toyonaka and allowed five runs. Ishihara Tasuku earned the win in relief after pitching the final three frames while surrendering one run.

The series resumes on Saturday afternoon at Central Park with a first pitch scheduled for 2PM. Come out early to help celebrate the 50th Anniversary of the San Mateo and Toyonaka Sister City relationship. there will be festivities all day in the park capped off by game three.

On a beautiful day in San Mateo and in front of a large, energetic crowd , the San Mateo Sister City All-Star Baseball Team fell to the Toyonaka All-Stars 6-4 this evening at Trinta Park. The win gives the boys from Japan a 1-0 lead in the best-of-five cultural exchange series.

San Mateo extended the lead in the third. With one out, Kullberg drove a ball to deep center for a double and later stole third. With two outs, Hagerman tallied his second RBI of the night with a line-drive single to left, giving San Mateo a 2-0 lead.

One inning later, Tomura Haruya put Toyonaka on the board with a solo home run over the left-center field fence. Ryota Kawauchi followed with a single to right and came around to score three batters later on a fielder's choice to tie the score at 2-2.

San Mateo would bounce back in their half of the fourth with two more runs to take a 4-2 lead. Nicholas Elu led off the inning with a single to right and walked home after a bases loaded base-on-balls later in the inning. With one out in the inning and the bases still loaded, Sancho Llamas singled to center field, driving home Sean Heffernan, who also walked earlier in the inning. On the play, Gianluca Caltagirone was thrown out at the plate for the second out of the inning.

The scoring would end there for San Mateo.

Three runs in the fifth and a single run in the sixth for Toyonaka would prove too much to overcome for San Mateo.

Jarrett Nelson started on the hill the Sister City All-Stars and went four strong innings, allowing two earned runs on four hits while striking out five with only one free pass. He would get a no decision.

Haruya went the distance for Toyonaka, earning the win while allowing four earned runs on seven hits while striking out 10. Haruya also led the Toyonaka offense with two hits and two runs scored.

In addition to Kullberg and Hagerman's two hits and Elu and Llamas' single hits, Luke Bottari added a single in the fifth but was stranded at first.

The time has come to finally welcome our friends from Toyonaka, Japan to our great city of San Mateo. It seems like last October was an eternity ago when we chose our 20 San Mateo All-Stars to represent the San Mateo Sister City Association as part of the 50th Anniversary Cultural Exchange.

After spending two days in Los Angeles to acclimate themselves with the California weather, the team flew to north to San Francisco and arrived this afternoon.

Grabbing all of their luggage, the group of 39 (20 baseball players and 19 chaperones) boarded a bus en-route to meet their new friends from San Mateo. A small bite to eat was had and then it was on to the fun...coming together like any other group of 11-12 year old boys would do.

The boys from Toyonaka are now sound asleep where they will call home for the next six days. We all look forward to a wonderful exchange, filled with fun and games...speaking of games. Game 1 is tomorrow, Wednesday at 5PM at Trinta Park. We look forward to seeing everyone out there to celebrate.
Posted by SM Sister City at 9:48 PM No comments: 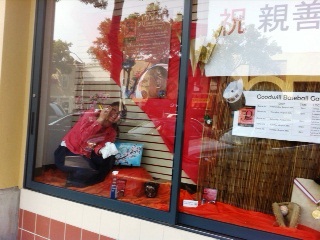 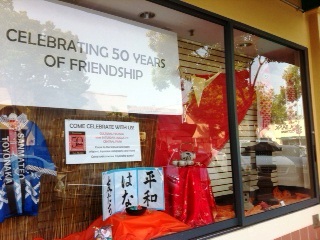 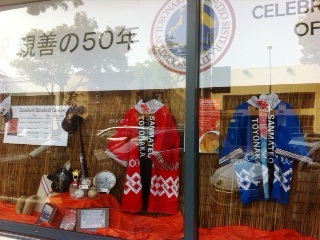 Posted by SM Sister City at 7:37 AM No comments:

Posted by SM Sister City at 8:16 AM No comments:

One Month from Today

In one short month, our friends from Toyonaka, Japan will be here in San Mateo to celebrate yet another wonderful cultural exchange...this one has even more significance as it will be the 50th anniversary of our two great cities sharing a sister city relationship!
Check back soon as the entire schedule of events will be posted here so you can help us celebrate this wonderful occasion!
Posted by SM Sister City at 10:42 AM No comments:

Posted by SM Sister City at 9:53 AM No comments:

Posted by SM Sister City at 4:13 PM No comments:

Posted by SM Sister City at 7:39 PM No comments:

This year is a special occasion because it will be the 50 year anniversary of this very special cultural exchange between the Little League communities of San Mateo and Toyonaka, Japan.  The last exchange in 2009 had 20 San Mateo boys traveling to Toyonaka; this year there will be 20 Toyonaka boys traveling to San Mateo to play baseball and learn about our community through a variety of cultural events.

Toyonaka is a city of about 400,000 people (about 4x San Mateo's population), and would be considered a suburb of Osaka, the third largest city in Japan after Tokyo and Yokohama.

This will be a great opportunity to show support for the San Mateo community, and to promote the cultural exchange between our two cities. The activities begin on August 13th when the Toyonaka players arrive at SFO, and end on August 19th when they leave.  In between will be picnics, ceremonies, the 50th Anniversary Dinner, and, of course, lots of baseball -- 5 games, in fact.

Between now and then, the parents of the players are working to raise funds for these community activities, by working with restaurants in the area to set up fund-raising events.  For each restaurant that would like to participate, we set up a day when customers can come to the restaurant, and a percentage of the purchases is donated to the Sister City Association.  We promote the event through the Sister City community as well as the larger Little League community in San Mateo, to bring the customers in.

In 2011, the total amount brought in was about $1000 from six different restaurants in the area.  We hope to improve on this year, and count on your support for this very important community event.

For more information, see http://smsistercity.blogspot.com/ as well as https://www.facebook.com/smsistercity.
Posted by SM Sister City at 8:04 AM No comments: