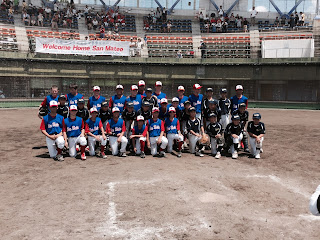 San Mateo tried to jump ahead in the first. With two outs, Jake Willerup and Nolan Rau both singled, but a a fly ball to deep center ended the threat.

Noah Frandsen tripled to right with two outs in the second, but the threat would stall there after a San Mateo strikeout.

Toyonaka exploded with five runs on only three hits in the third to take the lead and never look back. Two errors and two wild pitches aided in the third inning rally.

The lead would grow in the fourth when Toyonaka East added a single run to go ahead, 6-0.

Center fielder, Taylor Kaufman, hit an inside the park home run to right center to put San Mateo on the board in the bottom half of the fourth. Toyonaka now led, 6-1.

Unfortunately, Toyonaka East was not done scoring. They plated three more runs in the fifth to take their largest lead of the day, 9-1.

San Mateo mounted a minor comeback in the fifth. Jack Novello lead off the inning with single and moved to second when Dylan Carion reached base on a one-out error by the second baseman. Iris followed suit with a single of her own to lead the bases. After another San Mateo out, Kaufman drilled a line-drive up the middle, bringing home Novello and Carion. Unfortunately, the scoring threat would end there.

Will Bonini started on the mound for San Mateo. He pitched much better then the score would show. Only one of the five runs he allowed were earned. Cynthia Leong tossed the next two innings. She allowed four runs while striking out one. Ryan Ivers came in to pitch the final frame without allowing any hits.

San Mateo continues the series tomorrow with a double header starting at 10 AM locale time vs Toyonaka West in game one followed by a re-match in game two vs the Toyonaka East squad.