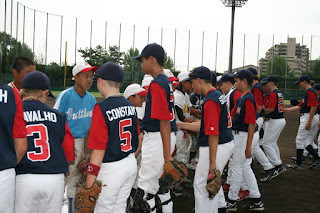 Toyonaka West plated two runs in the first, five in the second, three in the third and a single run in the fourth en-route to a 11-0 blanking of the San Mateo Sister City Goodwill All-Star team in Game 1 of the six-game exchange Friday night at Rose Stadium. The ballgame featured warm, humid temperatures, while also adding rain throughout the night. 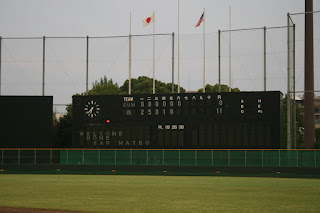 Jordan Pluchar took the mound and threw three innings. Matt Averill followed Pluchar on the mound to toss the final. Neither pitcher had the benefit of good defense as San Mateo committed seven errors in the loss.
San Mateo managed just four singles in the game. RJ Babiera led off the second with a single up the middle. A fielder’s choice followed by a 3-6 double play ended the inning without any further noise.
With one out in the fourth, Kai Martin singled to left. The threat ended there as the inning expired with a San Mateo 5-4-3 double play.
A lead-off single in the sixth by Jack Mori and a one-out single in the same inning by Dakota Severson were both unsuccessful in helping San Mateo blemish the score board.
San Mateo gets right back on the field tomorrow as they take on the Toyonaka East/North in the morning followed by Toyonaka South later in the afternoon.
Earlier in the day, the boys had an opportunity to meet the Toyonaka Mayor and were presented with some gifts. That meeting was quickly followed by an extensive lesson in Japanese traditional dance and then were treated to a Japanese tea ceremony. 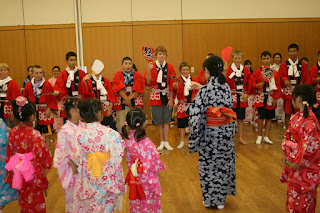 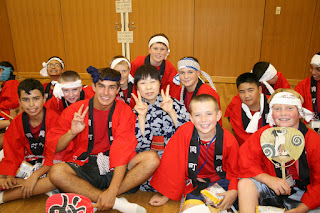 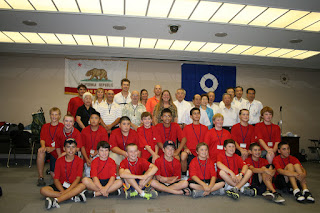 The day was long and very entertaining. Our hope is that our boys get some good rest and are ready to get back on the field for the series to truly get underway!
Posted by SM Sister City at 6:22 AM