A day after splitting a double header with Toyonaka, San Mateo again split another twin bill on Sunday, dropping the opener 6-3 and bouncing back to take the night cap 7-5. With the win, San Mateo is now 2-3 on the series with one more to play tomorrow vs. the Toyonaka East/North. 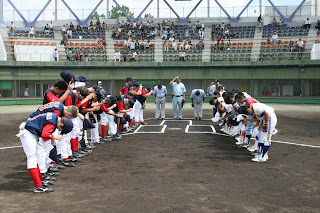 In the opener, Toyonaka South, who beat San Mateo yesterday 5-4, jumped out to an early 3-0 lead in the opening frame and followed that up with another three in the third.
With one out in the bottom of the second, Alexander Rodrick singled up the middle to drive in Dakota Severson who reached earlier in the inning on a fielder’s choice.
San Mateo plated two more runs in the fifth. With one out, Cole Constant singled to left field. Kai Martin then reached base when the second baseman attempted to get Constant out on a second. Both Constant and Martin later advanced on a wild pitch. Trey Kujiraoka grounded out short to third, bringing in Constant on the play. Henry Kazan followed with a deep drive to right for a triple, bringing in Martin for the final run of the game.
Nicholas Novello went started and went three innings for San Mateo. Matt Averill followed for the final two innings.
Due to time, the game would end after just five innings. 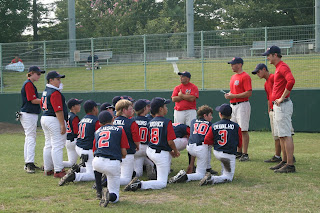 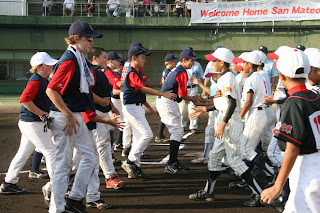 In the nightcap, San Mateo blanked Toyonaka West in the top of the first. They followed up with a four spot in the bottom half of the inning. Constant led off the inning with a bunt single and moved to second when Kyle Mejasich singled in the infield. With a 1-2 count and no outs, Jack Mori doubled left field, driving in both for Constant and Mejasich. Daniel Vanisi followed with a double to right, to drive in Mori, and Vanisi scored later in the inning on a two out double to left by RJ Babiera.
Toyonaka West tied the game with a pair of runs in both the second and third innings.
San Mateo would take the lead for good in the fourth. With two outs, Jordan Pluchar doubled to left to drive in Rodrick (infield single) and Ryan Simons (line drive to left). In the fifth, Langston Swiecki hit a sacrifice fly to left, driving in Kazan who led off the inning by reaching base on an error by the short stop to give San Mateo a 7-4 lead.
Toyonaka brought managed one more run in the sixth, but would not be enough as San Mateo held on win 7-5.
Mejasich threw the first four innings for San Mateo to earn the win. Kazan followed to throw the final two to earn the save. 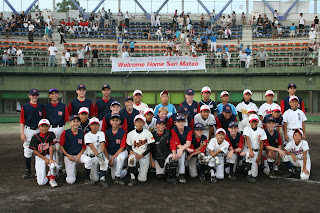 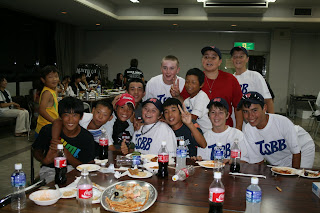 San Mateo wraps up the series tomorrow with a single game vs. the Toyonaka East/North.
Posted by SM Sister City at 6:41 AM